Posted by BGCCC
News
Comments are off for this post 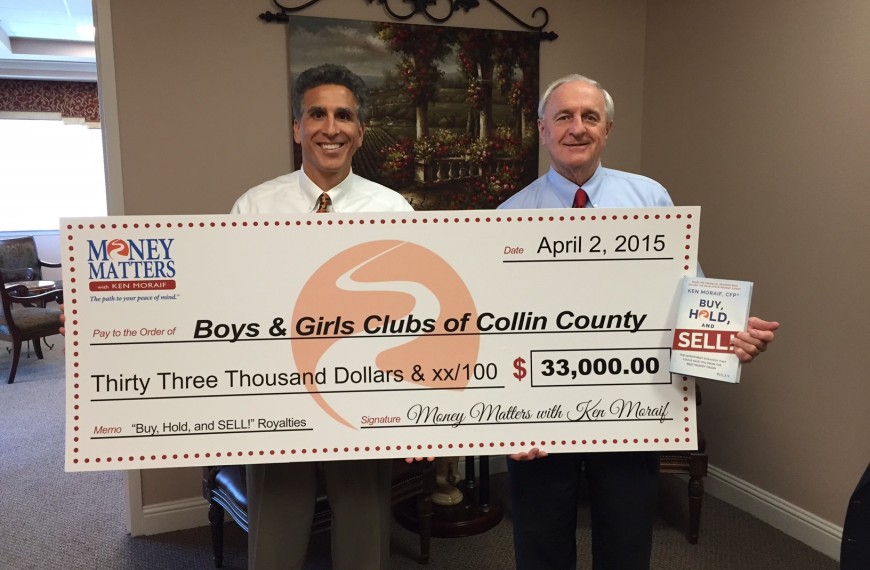 Ken and Fay Moraif have been major supporters of the Boys & Girls Clubs of Collin County for many years with Ken making a challenge donation at our Annual Chrysalis Ball in October of each year. He has for the past three years helped raise over $250,000, each year, during the Sponsor-A-Child segment of our gala with his $100,000 donation and by asking all in attendance to donate and help match his gift.

At last year’s 2014 Chrysalis Ball, he announced that he had written a book titled Buy, Hold and SELL!, about how to protect your investments and retirement from the next big crash. Ken, a highly regarded financial planner and BGCCC Board Member, told the audience that night that the royalties earned from the sale of his book would go to the BGCCC. At our Charity Poker Tournament, on March 19th at Gleneagles Country Club, Ken announced that the initial royalty check would be for $33,000 and was based on the early sales of his book. There could be more donations as the book continues to sell.

We thank Ken for this check for $33,000 as it will enable us to serve hundreds of additional children who may not be able to attend our clubs. In the event you wish to order a copy of this book, you can go on-line to: www.buyholdsell.com. Each book ordered will generate additional donations to the BGCCC.